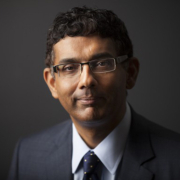 born in Mumbai, India, Dinesh D’Souza came to the U.S. as an exchange student and graduated Phi Beta Kappa from Dartmouth College in 1983.

A former policy analyst in the Reagan White House, D’Souza also served as John M. Olin Fellow at the American Enterprise Instituteand the Robert and Karen Rishwain Fellow at the Hoover Institution at Stanford University. He served as the president of The King’s College in New York City from 2010 to 2012.

His first book ,Illiberal Education (1991), publicized the phenomenon of political correctness in America’s colleges and universities and became a New York Times bestseller for 15 weeks.

In 1995, D’Souza published The End of Racism, which became one of the most controversial books of the time and another national bestseller. His 1997 book, Ronald Reagan: How an Ordinary Man Became an Extraordinary Leader, was the first book to make the case for Reagan’s intellectual and political importance. D’Souza’s The Virtue of Prosperity (2000) explored the social and moral implications of wealth.

In 2002, D’Souza published his New York Times bestseller What’s So Great About America, which anticipated the case that would need to be made for American exceptionalism and was critically acclaimed for its thoughtful patriotism. His 2003 book, Letters to a Young Conservative, has become a handbook for a new generation of young conservatives inspired by D’Souza’s style and ideas.

In 2010, D’Souza wrote The Roots of Obama’s Rage, which was described as the most influential political book of the year, and set off a firestorm which ultimately led to D’Souza’s first film, 2016: Obama’s America. The film quickly rose to the 2nd highest grossing political documentary of all time.
D’Souza’s second analysis of Obama came in his 2012 book, Obama’s America: Unmaking the American Dream, which climbed to #1 on the New York Times bestseller list.

In 2014 Dinesh’s book, America: Imagine The World Without Her, became the #1 New York Times bestselling book and the movie by the same title was the 6th most successful political documentary of all time.

In the fall of 2014, D’Souza found himself hauled into federal court for improperly donating money to a friend who was running for the Senate. D’Souza pleaded guilty, apologized for his offense, and was sentenced to eight months in a state-run confinement center near his home in San Diego.

On November 17, 2015, Dinesh’s new book Stealing America, was released and already has a favorability rating of almost 90% on Amazon and has risen to #16 on Publisher’s Weekly. Dinesh just finished filming the movie, Stealing America, in Dallas this past month.

In 2016, he released a documentary-style film and book, both entitled Hillary’s America, which offers his perspective on the history of the Democratic Party. D’Souza’s films and commentary have generated considerable controversy due to their promotion of multiple conspiracy theories.

Join us for an evening with D’Souza.